is an outstanding JRPG and one of my favorite games of the year. with a strategic battle system that anyone interested in battle mechanics must examine. Battles focus on forcing the player to make quick decisions with risks and rewards keeping players captivated. Players feel accomplished and satisfied after achieving goals they dreamed of minutes before.

While there are several improvements to be made, the battle system is engaging, especially in boss battles near the end of the game, because of the following game design principles:

As long as the player understands how it works (which the game doesn’t teach well), these principles synergize to create conflicting goals that require the player question what they want to do at any given moment creating combat that requires concentration in every battle. Winning a battle using the strategy you decided feels incredibly rewarding. Though random Blade acquisition prevents you from bringing in abilities you wish you could, you’ll probably find a way that works well enough for you and have very exciting boss battles from it.

For those who aren’t familiar with the game, I’ll start by describing the various complexities of the mid-game battle system in as simple terms as I can (hopefully better than the game teaches you how it works). Experts can skip this section. (Credit to Reddit user jp21231 for the image.) 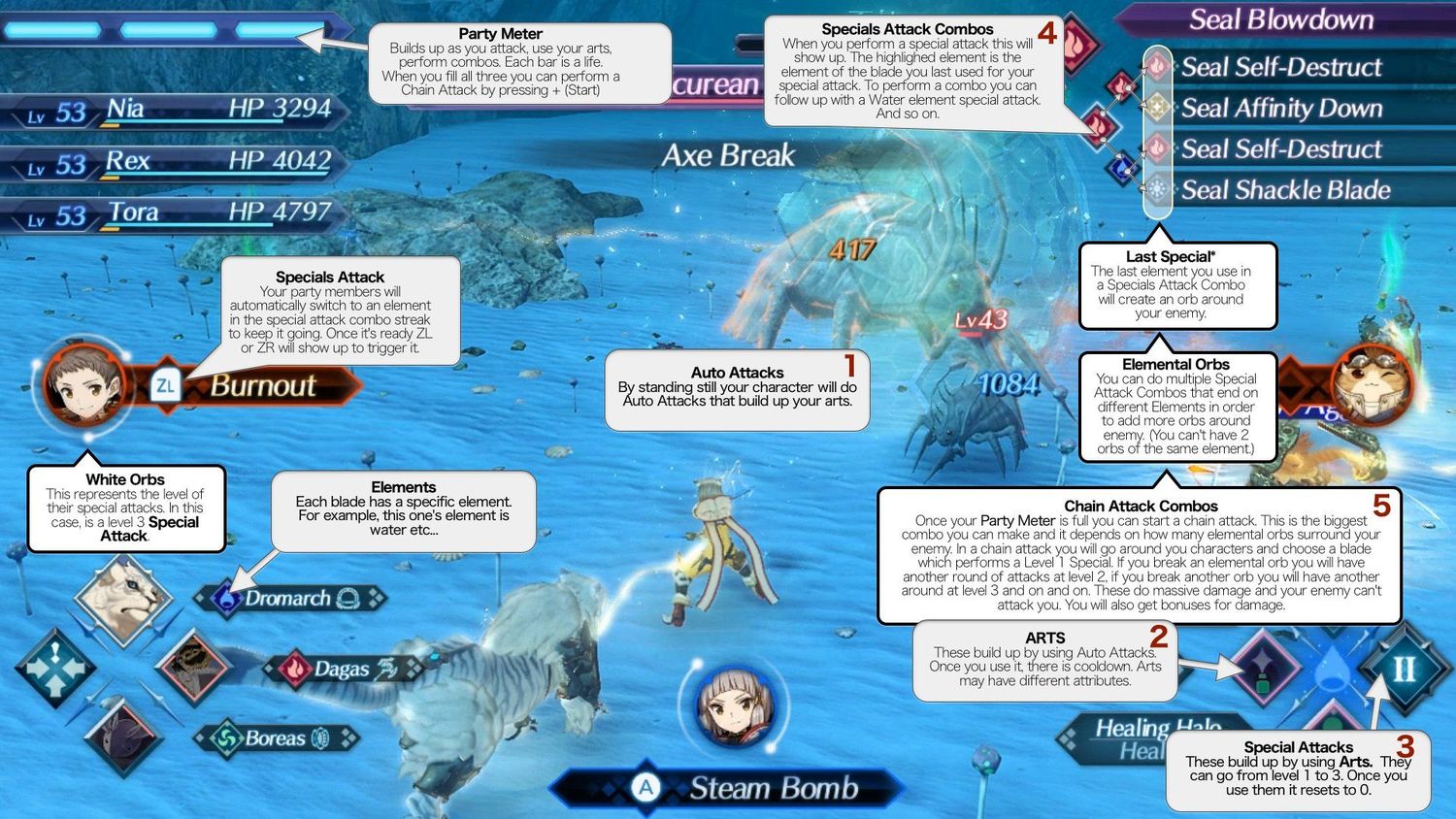 As you can tell, it’s very complicated. I do wonder if it’s too complicated, and it’s worth exploring if less complexity would improve the game.

For players to have strategy, they must have goals. In a given battle, players usually have one primary goal: reduce the enemies HP to zero before your party-lead character dies with no possibility for revival. I’ve broken this down into a list of subgoals players may form in their mind based on the abilities the game provides.

1 ) Do as much damage as I need to defeat the enemy as quickly as possible:

To perform a Chain Attack that deals maximum damage, the player must plan for five to ten minutes! To make the Chain Attack useful, the player must choose subgoals they want to complete in the next minute or two (finish a specific Blade Combo to attach an elemental orb to the enemy). To achieve these goals, they form even more subgoals such as using the appropriate Blade special attacks to get the right element for the Blade Combo.

These telescoping goals are what make the combat exciting. You constantly work towards a goal that contributes towards your long-term goal, and it allows you to see progress which makes you feel good. Combining the feeling of success with the juicy game feel of completing a Blade, Driver, or Fusion Combo or putting a Chain Attack into Overkill mode makes the player feel outstanding.

Because every mechanic has risk and reward, the goals end up conflicting in a player’s mind. The player must remember their strategy can be interrupted at any time if they need to reprioritize their goals (for example, healing all of a sudden becomes more important). This leads to a plethora of interesting decisions within the battle.

In a given moment, the player is thinking:

The tradeoffs built into every mechanic and goal make these interesting decisions pop into a player’s mind. Just to move, I’m giving up auto-attacks to gain a positional advantage. To pick up a potion, I must move, thus give up attacking. Is it worth it?

While I don’t want to focus too much on out-of-battle strategy involved in preparation for battle, your strategy is greatly impacted by which Blades you bring into battle. The Blades you choose determine what elements and abilities you have access to and thus the difficulty of performing Blade/Driver Combos. Players frequently must compromise on which Blades they bring into battle due to the randomization of obtaining Blades. Working within these restrictions encourages players to play better and learn different mechanics. I explore the largely negative effect randomness has on the game in another post.

Even 50 hours into the game, boss battles felt fresh because a player’s goals in battle gradually change over the course of the game. Here are the ways Xenoblade 2 manipulates player goals throughout the game:

At some points in the game, the battle system had me in complete flow. It’s rare for me to put off main story to fight battles, but I was wanting to challenge myself. The points where I was in battle system flow were triggered by my determination to master the mechanics I was learning at the time.

While in flow, I would attempt to fight the unique monsters in the game that are harder and gave better rewards. Unique monsters balance player flow by being optional content for players that are are higher skilled or progressed to test themselves, while lower-skilled players can safely ignore. Optional difficult content is a common strategy used to balance flow.

Early in the game, it’s possible to perform a Chain Attack, but players are unlikely to because there’s no real need to break elemental orbs. It’s not until later in the game that players discover how useful this mechanic is and begin to take advantage of it. It’s great that it’s allowed early on so that highly-skilled player or those in future playthroughs can take advantage of the mechanic to make battles go faster or fight tougher enemies. This is another element that makes flow possible for highly-skilled players (although some late-game mechanics are completely blocked off until later chapters, unfortunately).

Xenoblade 2 is a phenomenal game with a strategic battle system all game designers can learn from. While I have some suggestions on how the battles could be improved, there are a few lessons for your games: