Xenoblade Chronicles 2 is an insanely complicated game. The excellent battle mechanics is just one example of how complex this game is. With all this complexity, surely there are things we can learn about how to teach players mechanics in games. Let’s explore how Xenoblade 2 teaches players and how it could be better.

The incredible book on user experience, Don’t Make Me Think, suggests that the best user interfaces are self-evident – someone can look at the user interface and know what everything means and what they can do. Applying this to games: a game shouldn’t need to teach the player at all because the UX should be self-evident. RPGs typically have a problem with this due to the complexity of the mechanics. Xenoblade 2 is no exception. Just look at the battle UI (credit to Reddit user jp21231 for the image):

Let’s point out some good things:

Some things that could be improved (although some may be difficult):

While I won’t go into it too much, the menu UI leaves a lot to be desired. I was always pressing the wrong button to get to the map vs. changing time vs. the normal menu. The normal menu is also extremely complicated with as many different systems that exist in the game. This makes it more difficult to learn the progression mechanics than it could be. 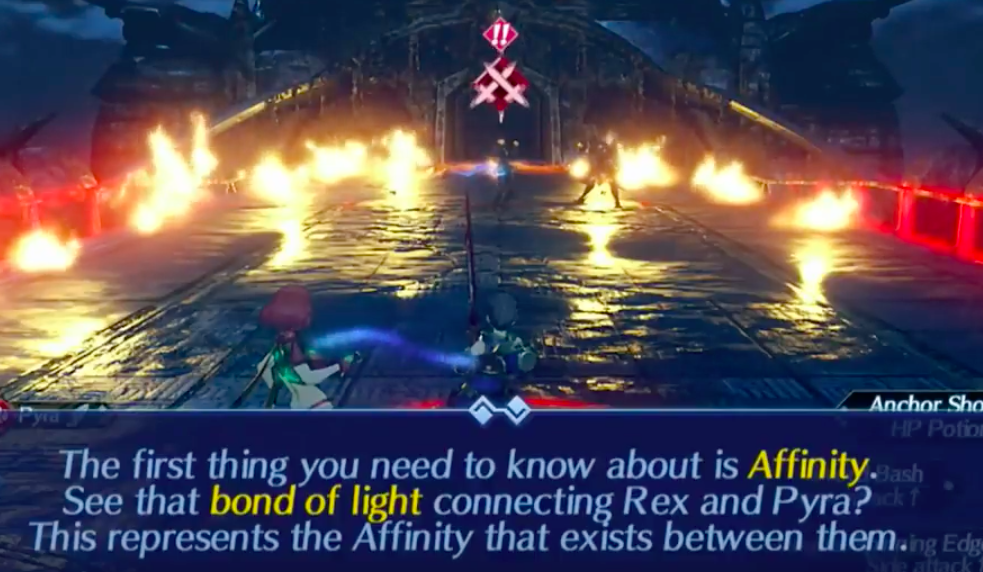 The majority of mechanics rely on tutorial boxes to teach mechanics to the player. This tends to have many problems:

Most importantly, the game teaches players without making sure they actually learned it! Games should strive to show the player how to do something and then require them to do it before moving on. This makes it stick in their head. Tutorial enemies that block the player’s progression for not understanding mechanics would’ve gone a long way in helping players understand mechanics.

The ultimate sin is the game never telling you how rare Overdrive Protocols are. In my playthrough, I found three throughout the 60 hours I played. I wasted the first one wondering what it did (it’s very unclear in the menu). I wasted the second one because I needed an extra fire blade on Rex to use a field skill (because I wasn’t lucky enough to get one for him naturally), so I used one. It was only later that I realized how rare this was. The game should warn players about this.

It’s unclear what affects your luck of getting Rare blades. With as horrific as the randomization is, you would at least want to know how you can maximize your chances.

Ending on a positive note: I love the helpful NPCs in the game that remind you of mechanics. While it could be done more often, I appreciate this. It helped me realize “Oh, this Break, Topple, Launch, Smash sounds important. I should try it out.”