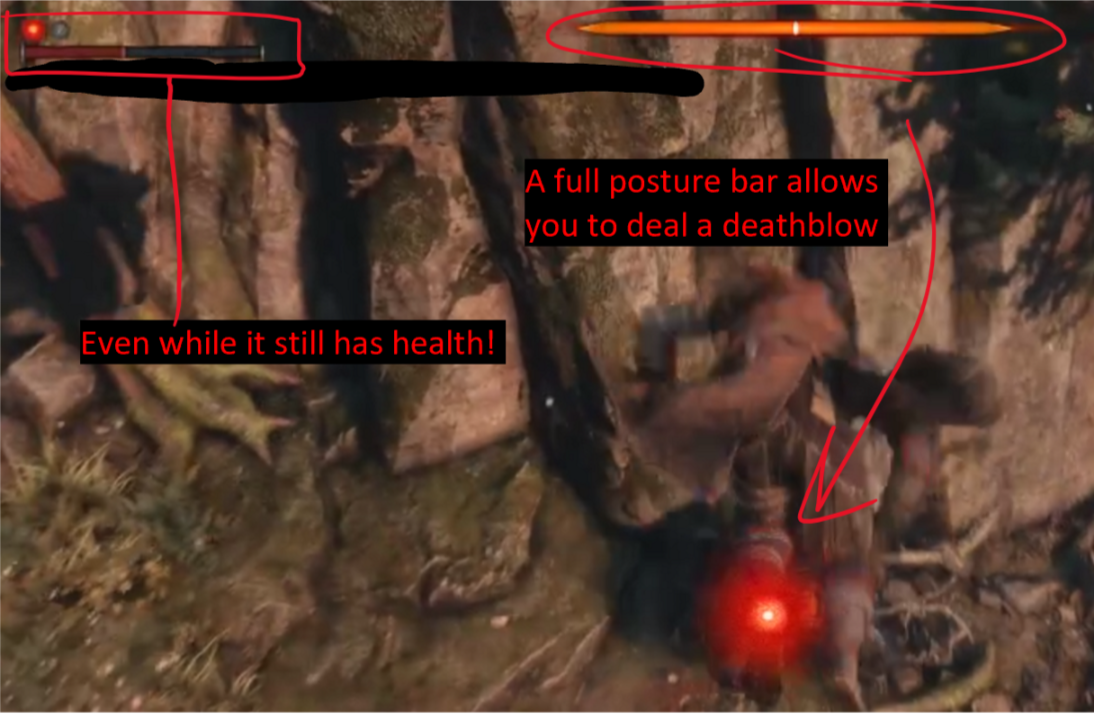 As vitality decreases, the posture bar changes color indicating it takes longer for posture to recover.

Why is the posture mechanic so good?

It’s vital to support multiple player skill levels in any game. You don’t want the game to be too easy and slow for good players, while reasonable for lower-skilled players (which, in a From Software game, tends to be a pretty high floor).

The posture mechanic is great for multiple skill levels in a couple of ways:

Beyond difficulty balancing, posture also encourages the most fun way to play the game: deflecting swords make you feel like a samurai and gives you amazing battles. You could argue that this is the essential experience the game was trying to create – have an awesome sword to sword combat as a samurai! Without posture, I would imagine players wouldn’t use deflection nearly as often and resort to strategies that aren’t as fun, such as hit-and-run tactics.

What could be better?

More Consistent Posture-Killable Bosses For Speed Runners – All this sounds great in theory, but not all bosses rely on these mechanics. Sometimes bosses can be beaten with glitches, cheesy strategies, or items that make bosses easier to kill (specifically divine confetti feels contrived and makes a breeze of certain mini-bosses which were considerably more difficult without it).

These defeat the purpose of the game. If it’s meant to be a difficult trial for people to overcome, cheesing a boss 1) doesn’t help the player learn, 2) feels like a hollow victory, and 3) lowers the bar for people successfully beating the game (which is something the market of this game cares about, since they want to feel like people must “get gud” to beat it, like they had to).

Use Positive Reinforcement – The game often relies on punishment for doing badly, which isn’t great at teaching behavior over long periods of time and pushes people away from the game. Instead (or in combination with), they could use positive reinforcement for teaching players to time attacks and deflection correctly.

If the developers care about getting more people into the game, conditioning low-skilled players how to deflect properly using positive reinforcement (rewards that these players care about) would teach them that deflecting is how the game is meant to be played. People would get better faster.

How could they teach players? The reward could be extra experience or gold for deflecting, coupled with more juicy animations. Another idea to teach players could be to add even more challenge layering through early optional content. Perhaps a bonus for deflecting perfectly on an early boss? Or maybe a specific side quest early on to deflect 10 enemies perfectly?

Sekiro’s posture mechanic is awesome! It’s a great way to encourage players to play like a samurai and have fun. It rewards players who are great by allowing them to move fast while maintaining a challenge. There are ways to improve it, and I think we’ll see From Software expand on these mechanics to make the games (a little) more friendly for newbies while maintaining the notorious difficulty.